A Conversation about Diversity, Equality and Inclusion 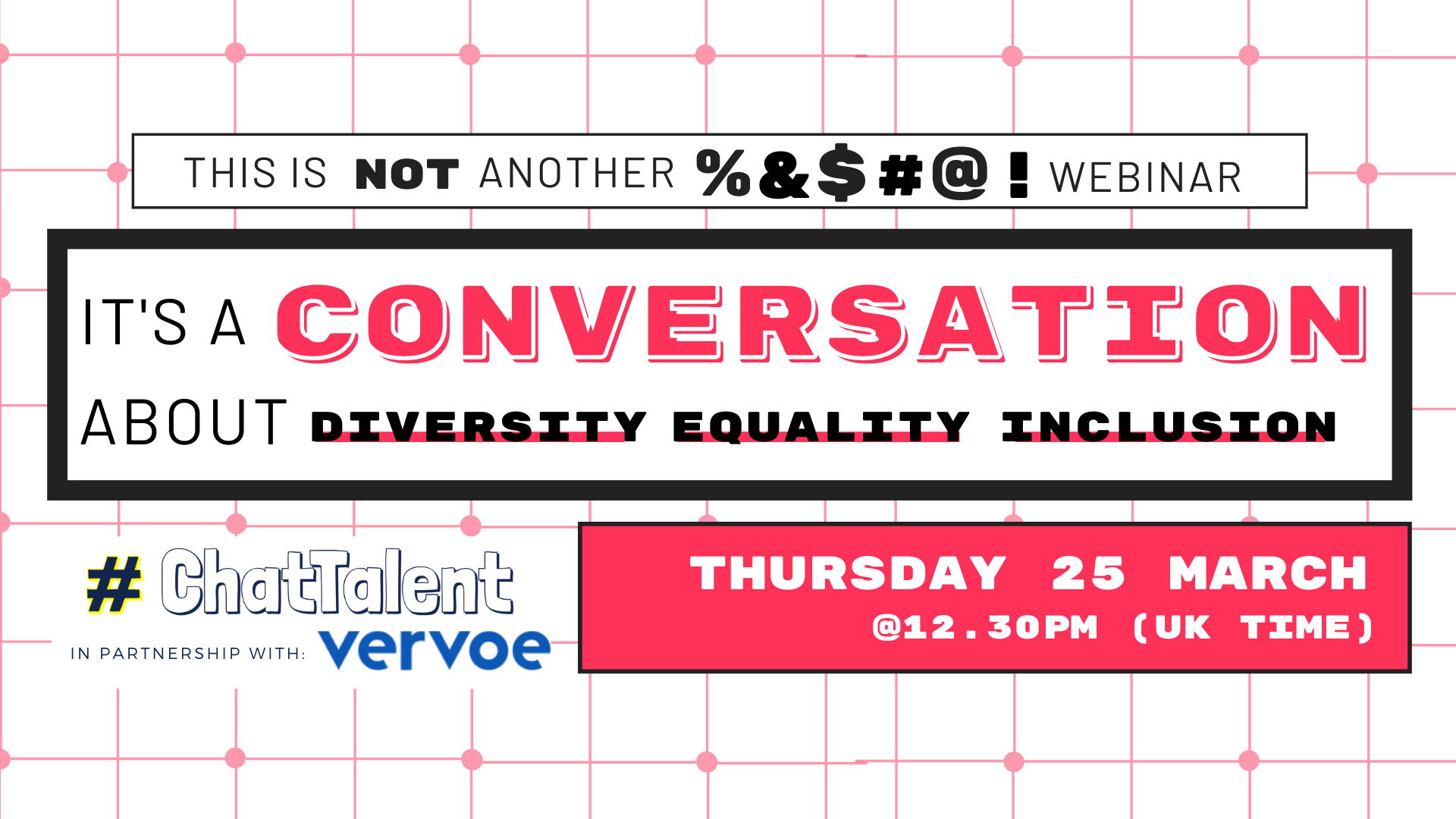 Hi! I'm the Editor in Chief of #ChatTalent. That sounds grand, but really my job is just to make sure you get good content - be that blogs, webinars, live broadcasts, or anything else to do with talent. If that isn't the case, let me know.

Good morning, afternoon, evening or whatever works for you – thank you for joining us for another “Not Another %$#@! Webinar” event about Diversity, Equality and Inclusion.

Like always, I try not to do too much of a long-winded intro, however, I did start off our event with a bit of housekeeping about how the event platform works and an overview of what to expect.

The purpose of this event was for us all to have a conversation about diversity, equality and inclusion.  And I really do mean conversation. Making a point of not just broadcasting stuff to our audience.

The event started from the main stage, where we got to know our contributors a little bit better before we started firing questions at them.

I decided that the best way to do this was to ask (in alphabetical order) who they were, why DE&I is important to them personally and what role it plays within their day-to-day. [6:05]

Touching upon a topic that Rocki mentioned in her introduction and before moving over to the audience questions, I asked: what do you believe causes the most issues around a lack of diversity? Do you think it’s a belief or behavioural problem? Or is it a problem of systems and our ways of working? [13.45]

“One of the challenges with diversity is it’s a business proposition that challenges a person’s belief. It often involves guilt and shame. There is no right or wrong answer – DE&I is a very complex thing.”

“The way DE&I is sold within an organisation is – it helps performance. Not because it’s the right thing to do, or because it’s fair. Or uplifting to society. And I think that says a lot about where we are.”

A lot of the solutions need to come from higher up, from the C-suite, from management. Who, the majority of the time, are middle-aged white men.

“As a middle-aged white man I thought I knew, but I had no clue what it was like. Not until I met my wife. I had never experienced the micro-aggressions or the “accidental” things that people may say or do.”

“That is 100% part of the problem. Think of our academic conversations about diversity and inclusion, it always feels like it is something that is happening over there. As if it’s not happening within our company”.

Opening people’s eyes through storytelling, honesty and examples of things that people may not know about is how we are going to shift the awareness. As the majority of people are not bad people, they aren’t biased.

But 90% of people live within a bubble. They live, work and spend time with people who are like them.

“There is also this misconception, I think, about the word talent. The “war on talent” is not a real war for talent. The only thing you are searching for within this talent war is access to opportunities as opposed to whether someone actually has talent.”

Almost running out of time before breaking out into our sessions, I asked a question from the audience:

– Sometimes within an organisation the topic of diversity, inclusion and equality can perpetuate a ‘Them’ VS ‘ Us’ divide and end up being counterproductive. Do you have any examples of best practice when it comes to this? –

“In all honesty, these conversations are going to be uncomfortable. It’s going to feel like a “Them” and “Us” situation because it is. It is going to take sacrifice. You are going to have to make a commitment to changing your culture and your ways.”

The voices of Diversity, how can we make them heard?

with Rocki Howard and Theo Smith

Bringing Diversity, Equality and Inclusion to life in a large corporate

with Chris Dinwiddy and Alan Walker

Is Social Mobility the Solution?

with Bob Athwal and Jeremy Russon

Throughout the entire event, all I wanted to do was stand up and clap. I cannot begin to express how much I enjoyed it. It was brilliant. And I am so proud of what we achieved. The amount we covered in just 1.5 hours was incredible.

Whether you were there live, or you’re just watching the recordings now – I really, REALLY hope you enjoyed it as much as I did

Finally a BIG MASSIVE THANKS to our event partners Vervoe. It was thanks to them that we made this event a reality. To Zinc and Candidate.ID and all of our other friendly vendors (yes, #friendors) for helping us promote the event.

And an equally BIG WELL DONE TO ALL OF US, as for every registration we received we donated £5 to the Trussell Trust.

We hope to see you at the next one!

A Conversation about a Looking Beyond the CV

Good morning, afternoon, evening, or whatever works for you – thank you for joining us for another “Not Another %$#@!...

A Conversation about Personalising Flexible Working

Hello and welcome to our conversation all about Personalising Flexible Working. To start us off, I gave a mini summary...