When It Comes To Talent Technology, Do You Feel Like You Are Sitting Outside The Door Wondering What’s Happening Inside The Party? 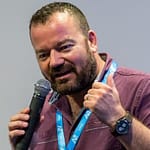 This piece goes out to all those people, like Lee Burman, who are sat there feeling like they are sitting outside the futuristic TA technology party and really wanting to see what is inside… In truth, it’s probably a fairly lonely dance!!!

If you go to any Talent Acquisition event you are likely to see speakers talking about the silver bullet… Phrases like “Artificial Intelligence”, “Virtual Reality”, “Augmented Reality”, “Intelligent Automation” banded around. You may even see talking-heads or people staggering around in Occulus-Rift style glasses jumping out of aeroplanes, running around mines or catching criminals.

But let’s be honest, for many organisations this is a hugely aspirational state and there are many that, due to culture, budgets, size, etc. will never get there… But, just how many are really within touching distance of the “mecca” that AI appears to be – or conversely, still, have the full length of the M1 to travel to get there?

I suspect if we took all organisations in the UK as our sample population we would probably see a fairly normal distribution measured against a bell curve… Oh wait, before I go on, two apologies:

1 – to those who aren’t stats experts, if you want to know what any of the technical words mean in fairly plain language, have a look at https://www.mathsisfun.com/data/index.html

2 – to all the Data Scientists, Mathematicians, Statisticians, Analysts, Experts, etc. out there – I apologise for dumbing-down and maybe “self-interpreting” some of the terminologies but needs must!

Anyway, back to the story…

I suspect if we took all organisations in the UK as our sample population we would probably see a fairly normal distribution measured against a bell curve.  Before we show this let’s have a look at the stages of growth of a TA function from a perspective of how they use technology in terms of some words that we probably understand or at least have heard of, and a few I’ve decided fit my story !!

Artificial Intelligence: the future state of TA, possibly or probably not, where “robots” do the whole job including making decisions that take account of emotion, nuance, etc., basically everything that sets us apart from them.

Intelligent Automation: okay, so now we are getting closer to a state that some organisations are already at and most can aspire to achieve in the author’s lifetime. “Robots” take the heavy lifting of mainly administrative or repetitive tasks. I think this is the point in time where we will start to see more and more actual implemented, tested and widely proven technology being “presented” at the events mentioned above – not just chatbots but automated screening, applications from social media platforms, interview scheduling, etc……..oh, and before I forget Danny Hodgson, of course, let’s not forget the planning stage!

Driven by an ATS/CRM: did think about calling this the “post-and-pray” era but of course tech isn’t just about advertising/sourcing.  Typically, there is probably an ATS/CRM in place and possibly some basic technology to multi-post adverts and maybe some automated testing…..but not integrated with the ATS/CRM. Lots of manual workarounds probably exist that could be automated but aren’t.  This is where I suspect the majority of UK companies sit!

The ATS (with an agency portal) is the start and finish of TA technology: so you’ve got an ATS… So what!? Okay, seriously, this means you are compliant during the recruitment process, sort of!  This is surely the minimum tech that any company recruiting more than 5 people should have (bear in mind that may mean 500 CVs probably thrown at the wall by agencies !!!)

Excel + Email: you would really like to think this isn’t still an option given the plethora of subscription-based ATS options that now exist REALLY cheaply in the market… Sure, they are basic, but they do secure data substantially better than Excel + Email…

Email Your CV to personnel@XYZCo.co.uk: I did wonder about adding this further stage for companies that still just ask for CVs to be emailed in but don’t control their workflow/process in any way…..but it is likely they probably haven’t heard what Tim Berners-Lee did!!!! I added it for statistical relevance since it probably reflects the opposite of Artificial Intelligence.

So, back to Normal Distribution and superimposing the definitions above on to a Bell Curve… If you imagine the space under the curve is ALL UK companies (or the UK division of non-UK ones), regardless of size (except sole-traders since they don’t recruit people), revenue, sector, etc we know from all aggregated research data that generally, where the highest point (usually called the Mean) is the most frequent occurrence of the data subjects (UK companies) which we call the Typical Organisation, the rest will generally be distributed fairly evenly around there!

It looks a bit like this… (please note, rounded to the nearest whole number… I know it adds up to more than 100%!!)

Suppose there are 100 companies in the UK (it’s actually just under 6 million* but 100 is easier for this purpose) – 68 of those sit in the category “Driven by an ATS/CRM”.  Of those some may be closer to “Intelligent Automation” whilst a similar amount will probably sit closer to “The ATS (with an agency portal) is the start and finish of TA technology”……..but ultimately, almost 70% of UK companies, or 4.2 million in numbers, are in this main bracket.  Doesn’t feel so lonely now, does it?

Now, continuing the “statisticsesque” theme, I am sure for different industries there are slightly different graphs. So, for technology, we may shift the bell to the right slightly, but not a lot has given how bad the reputation of a certain tech cos recruitment Artificial Intelligence actually is…

Equally, for Financial Services we may push the bell a little bit to the left in my experience…

Ultimately, the picture is still the same… Ie that there is a relatively small number of organisations getting to attend the dance, and even less getting a snog!!!!! In other words, don’t worry, if you aren’t at the AI party yet… You most definitely aren’t alone!

There is, of course, a practical point to this… Apart from making 96% of the talent market feel less lonely. 😊

If you are a recruitment/talent technology company and you are leading your marketing efforts with how great the Artificial Intelligence elements of your technology are you may well be making yourself appear irrelevant – or completely scaring –  about 96%+ of the market.

AI may, or may not, be the future of technology in our sector, but in truth, most don’t care/understand how it works or if it’s relevant to them.  All they want to know is whether your technology is going to solve their current problems and make their talent functions/processes even better than they currently are – and throw a bit of future-proofing in once you’ve solved those problems.