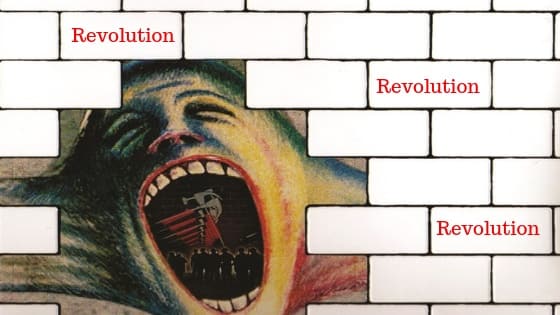 Revolutions across the history of the world don’t follow a trend of starting at the point at which they are planned, they are often an uprising, political or economic pressure, time for change that can no longer hold on or wait!

There comes a time when all the speaking, conspiring, negotiating, rallying, reaches a point and at that point it breaks, crashes or explodes into a revolution.

Sometimes with catastrophic effects and not always achieving success, but often it is the beginning of significant change.

Here’s a few examples through history of the final spark that’s got the good old revolution going.

King Louis attempted to shut down the National Assembly that had been growing in its influence and power, but on June 20th its members declared that they would not disband until they had written a new constitution for France.

The tension hit a peak, and the mass crop failures that created food shortages played its part in raising the temperature.

In Paris, mobs filled the city’s streets. There was a real fear that the king would retaliate with strength and vigour.

On July 14th the mob stormed the Bastille to obtain arms. The attack shot the nation down a road that would leave no route back and eventually lead to the destruction of the monarchy and the execution of Louis XVI.

Russia during the first world war were in turmoil, generations of rule by the Romanov’s was coming to a bitter and violent end.

However it didn’t come at the point at which it was expected and it took several hits at it, almost costing Lenin his life during the process.

Lenin himself was quoted just days before the first shift of power saying the revolution ‘might not happen in our lifetime’. Only days later he was eating his words and said ‘Such a surprise… It’s staggering’.

“In ‘Revolution, Rebellion, Resistance…’ Selbin recalls how in 1958, when the revolutionary struggle in Cuba still seemed to hang in the balance, revolutionary leader Fidel Castro drew on a story from Cuba’s 1895 war of independence from Spain. The story tells about how two of the struggle’s greatest heroes set fire to the island’s profitable sugar cane fields as a signal of commitment, defiance and the readiness of the Cuban people to sacrifice everything for their independence from Spain. Castro had two of his lieutenants replicate the famous “incendiary march.”

“It proved to be a brilliant tactical stroke which succeeded on several levels: militarily, psychologically and culturally,” Selbin says”

Here we had the mastery of storytelling and influencing others through past history and elegance’s to create the impetus needed push the revolution forwards.

So what can we learn from this?

So are we on the precipice of a talent acquisition revolution?

There’s been a lot of talk recently about the quality of our Talent Acquisition and Recruitment functions.

‘Are we ever going to be better than this’

Was just one subject I was involved in discussing recently at a recruitment event as part of a panel. It certainly got lots of interest and created a healthy and engaged debate.

Dear Talent Acquisition… can we please get real?

Ben in his usual straight talking engaging way encouraging us to start to implement what we are learning and go beyond the basic parameters in which we’ve been performing.

Stanislaw Wasovicz posing the much discussed and debated question should TA be on the board or at least closer to the decision making table!

And maybe surprising to my TA professionals there seems to be e general feeling and consensus that this may be neither required nor wanted.

It seems there is a much greater focus on walking before running and ensuring that we are heard rather than given a seat we may see no immediate value in.

I believe these are all important and good debates to have.

And actions without debate; brings about nothing but trouble!

Debate in my view ultimately is what brings about change.

Yes actions need to follow, but without the debate, questioning, theorising and hypothesising we ultimately face making decisions and imposing actions that fail or never receive the backing of those key influencers who help ensure success.

Some of the biggest seismic shifts in society and democracy didn’t come about quickly and certainly didn’t happen without hours, weeks, months and years of debate, influencing and negotiation.

The pure fabrications and constructs of the Russian revolution, by those who lead it, were developing and happening over 20+ years. The whole movement was kept alive through communication via pamphlets, papers, meetings and speeches. Actions followed strategically, periodically and sporadically.

We only have to look at the current global political system for voting to see that things have not radically changed.

However it has been digitalised.

A large part of political activism is done through branding, communication, pamphlets and soundbites. It’s just we don’t need to attend a rally to see our revolutionary speaker anymore, we can watch them via our smartphone.

Just as we no longer have to attend a recruitment event to hear from our leaders and influencers, blogs, webinars, online events, social channels… I could go on.

For me this relates to working practices as much as it does to business success.

At the national institute for health and care excellence, the guidance that they provide to the health sector is backed by years of research and analysis. It is not done quickly and without clear and concise evidence.

So we cannot expect in the short time that in-house recruitment has become a thing, that our conversations and our ideas should have already been embedded and accepted as best practice.

It’s a perfectly personified millennial that thinks we are somehow owed something by our companies and colleagues because we as TA professionals find the most important business asset: people!

We need to get real if this is the case, as we’re baby’s in comparison, and we as a division and a function need to earn our stripes and show our worth, and ultimately fight for the right to be heard!

Rather than request to be put to the head of the table to be smiled at, entertained and fed.

I’ll apologise now to all those people who’ve come before me, who are upset, annoyed, bored, frustrated or whatever other feelings you’re having towards recruitment and talent acquisition.

I’m sorry you feel we’ve not gone anywhere and we’re going backwards and the conversations are becoming boring or old.

Well that’s your generation, or thing, and it aint my fault you or others didn’t fix the problem, and that you’re not sat at the adults table!

It’s not my fault that things didn’t work out well and the world hasn’t responded to your teachings in the way that you had hoped.

So I’m just going to be busy over here making stuff happen.

That may be through talking, reading, writing and communicating. It’s also going to be, by making sure the organisation that pays my wage can see in facts, figures and percentages, why they employed me.

Sure it’s not easy, lots of banging my head against the wall, wondering if I’m talking another language, constantly worrying that I’m not being understood.

But you know what, I actually enjoy it. It’s fun, it’s engaging, it sometimes feels like we ‘can’ actually wade through all the oil to get to the hot springs, even if just for a minute.

I also like to hear what people are doing in their roles and I love to celebrate the success of others. So what, if what they are doing now was what we did five years ago, it’s new to them and they’ve clearly worked hard to get there.

And let’s be honest with ourselves, lots of the achievements I hear of, are sprinkled with fairy dust! The truth is, that making stuff happen is tough, it needs lots of commitment, engagement, negotiation and often budget, and even with all these things success is subjective.

So let’s take a moment to breath in the air that’s around us and accept that maybe we’ve not been the best, or good enough, but that we do care, we are passionate about the industry and ultimately there will be a group of us that will succeed.

One day my dear friend a revolution will come

and just when you thought it wouldn’t…

So maybe the revolution will be technology, maybe it will be the art and science of seats at big tables, or maybe it will just be all the work, conversations and negotiations we’ve been having finally just slotting into place.

We may not even see it coming, but all of a sudden it will be here and I promise you I’ll be on my surfboard riding the crazy wave having the time of my life.

Hopefully you’ll all want to join me, and rather than looking back at these moments and seeing them as where we failed to make any significant change, we’ll look back and see this period in time as that which defined the future of Talent Acquisition.