Recruitment Marketing, Homo Sapiens, the Death Star and beyond… 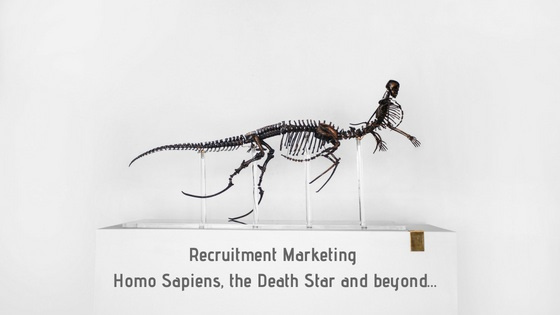 When humans where hunters, we considered ourselves equal to the trees, plants and animals around us. Our networks were small and we had little need for complex forms of communication.

We then became farmers and with this came the need to work with others and build communities and networks for trade and for the development and progression of our communities. At this point to meet our own needs we set ourselves above our primate friends.

Then came the struggle for power and the need to position ourselves above even our human counterparts, working to convert others to our will and way of thinking. Armies were recruited and lands and titles fought over.

Space travel, communicating via satellite, exploring the Universe and finding that it’s expanding faster than we could have imagined.

But back on the ground, people were taking to the streets to fight for the right to vote, for equality, for freedom and to freely share their voice with others.

For the first time via the power of tweets, Cairo filled with vast numbers of demonstrators. The world was fully engaged in every moment as it happened, eyes glued to social media, to see it and feel it from the view of the demonstrators.

And that was just the beginning…

Companies brought to account and crushed by scandal for the way in which they obtained and distributed content; News of the World, Cambridge Analytica… and next… Facebook?

But amongst all this, there is still the desperate need to communicate, the need to share ideas and concepts, views and opinions. The need to be seen, to be heard and to be understood.

We’re creating information at such a rate that the Universe could by 2098 run out of cloud space to store it. (Fake or Real News?)

The modern-world during globalisation has metamorphosed into an interconnected, data-driven, AI-powered death-star.

The people of the death-star were consumed by a sea of doublespeak; so confused & disorientated they couldn’t see the ‘dark-side’ from the ‘force’.

Recruitment Marketing has given the ‘rebels’ the opportunity to cut through the intergalactic noise with videos or holograms of members of the rebels talking about their actual job.

Sharing genuine pictures & comments from those fighting the good intergalactic cause.

Now the rebels have the ability to send targeted marketing that’ll convert the employees of the death-star to a new way of life!

So what does the future have in store…

It’s not enough that the hunter found a way to sustainable living through farming.

It’s also not enough that the farmers built communities, networks and trade to maximise their produce.

Because it was all undone by the need for power and the need to control what we see, how we see it and when we see it.

As marketing becomes more powerful, more targeted and our senses become more attuned to content that smells a bit fishy, we need to retrace our steps to understand how, since the early days of innovation and space exploration, we got to where we are.

What we’ll find are children who were fed Findus crispy pancakes, mirco-meals and value ‘horse’ sausages by their baby boomer parents during the creation of the internet and globalisation, without any consideration for what was in them. Giving us a glimpse into where the digital explosion of the consumption of garbage happened.

The children of the nineties, now grown up and parents ourselves, we must promise for the good of humanity and to ensure the quality of our recruitment marketing efforts, to always look beyond the brand and to identify the real ingredients of what’s going on inside.

We must also remember the power of social media in the noughties and how tweets, pokes and likes became an obsession to the point that nobody was actually checking the content anymore and what it actually meant or where it originated from!

Which must be a reminder to promise ourselves never again to believe everything that Wikipedia, Twitter or Facebook posts tell us.

Because of this naivety or stupidity, we’re now living with the consequences of having recruited world leaders into posts, who would have been better suited to living with our homo sapien hunter friends!

Finally, we should swear an oath; to always look for the truth in everything. To learn more, to connect more, to listen more and to speak to those who are ready and able to listen.

And so the story unfolds…

As we move from space exploration into digital exploration, to AI and beyond, we must continue the fight against flat content; and fuel the belief that only a future with four-dimensional content can exist.

And ensure a world, where, in the end, no matter the channel or the medium, only the truth and those who share it, will survive!