Leading from Da Back of Da Class 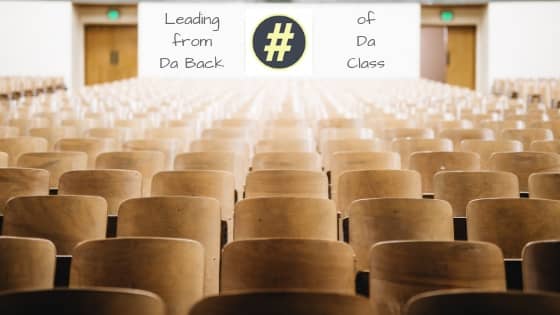 Yes that’s it you know the one at the back of the class, the disruptive one, the stupid one, the one with the learning disability who can’t sit still for a minute.

You know the one!

You remember their name…

(The only time my name will probably get into a list with these names!)

I could go on…

Neurodi… what did you say :o/

Surely people who struggle in academia and in business clearly have a problem, right?

In actual fact no! A western society that has built an academic prison for the 20% of the working population who’s brains engage and respond differently, are not broken, they don’t need fixing and contrary to popular belief, it is not a disability!

These particular dynamic and highly interesting creative brains have been disabled or confined by the constructs and constraints of our education system and furthermore by our built environments and the fabrications, processes and leadership styles of our businesses.

We’ve also not helped matters by allowing the 80% to create the assessment and selection process that very rarely likes or appreciates the needs and capabilities of the 20%.

I could get all political here and say equality, diversity and fairness are areas as a human race where we’ve catastrophically failed. I won’t bang the drum on the wider matter as there are far more influential and experienced people to further that message.

What I will do is talk about something we should be aware of;

You’re dyslexic or have AD(H)D, or a combination which is not uncommon, clearly you’re going to play second best to more ‘perceived academic’ candidates.

But wait a minute there have been study’s that have shown that c.30% of entrepreneurs who start up their own business are dyslexic. (Source: Julie Logan, Cass Business School “Dyslexic Entrepreneurs…”, 2001)

What super powers do they have to help them along the way?

I could go on.

And it doesn’t stop here. There are plenty of examples of autistic kids excelling in IT and digital.

There are forward thinking organisations like Microsoft who are tapping into this incredible talent and finding ways to accommodate that talent rather than asking the talent to accommodate their assessment process!

We’re not talking poultry jobs here. These skills are in such demand that people earning north of six figures in consultancy roles is just becoming the norm.

First of all companies do!

Because employers have chronic talent shortages like we’ve never seen before. Manpower reports global talent shortages have reached a 12-year high and those companies that are feeling the pressure of filling roles are the medium to large size organisations of between 50-249 and 250+ employees. But in all honestly this is a problem across the board!

Companies are already fighting to solve this problem and recruiting from outside the traditional talent pool is high on the agenda!

The right skills = The right results

The world is now evolving at a phenomenal rate! The reality of the situation is that reading and writing is fairly new in terms of human evolution. Our brains are still adapting and those brains that where wired to deal with a very different world, are perhaps struggling a little more than most.

Basically we’re shoving star shaped blocks into square holes and they ain’t going in. School teachers with class sizes of 30 just haven’t got the time to focus on those 6 students who just can’t access the curriculum in its current structure. So they don’t, unless there is some level of intervention from the parents or support groups.

If that’s not bad enough we then have a whole history to support bias towards those who can spell properly and look you in the eye when they are answering questions.

A digital revolution has begun…

And guess what brains are wired to be more visual, creative and hyper focused!

But let me be clear this is not an us and them situation it’s clear that we will be experiencing skills shortages in the future and we need to look at who will be best placed to fill those gaps.

There should be opportunities for all!

Employer talent needs are not being met and furthermore the wrong people are working in jobs based on assessments that, in my opinion, have not always been fit for purpose.

So we’ve talked about the percentage of entrepreneurs who are dyslexic, the next staggering figure:

Overall, 53% of (2,029) prisoners at Chelmsford during a special project were diagnosed as having dyslexia, compared to 10% of the UK population (data: British Dyslexia Association).

What can I do?

as individuals we can just learn as a first step and try to understand what it is to be Neurodivergent.

For me this is the diversity that crosses all diversities, because it’s neurological.

However that doesn’t mean it’s fairly distributed and clearly those who have had privileged lives with greater support and encouragement are more likely to go on to succeed in spite of the current system.

Those who have not had the support will suffer all the more as I’m sure Chelmsford prisoners can testify to.

If you are in a position where you can influence your community, your organisation and the paths with which people have to follow in education, business and in life, then please do take steps to influence, guide and encourage the required paradigm shift.

Take a moment of pause!

If you’re in an interview and somebody is not holding eye contact. Use the pause to ask yourself why?

Is it because they will be a terrible team member and are a bit inadequate?

Or actually could they be a fantastic problem solver and hyper focused individual who will deal with all the work and projects that nobody else wanted or lacked the motivation to do?

Because personally I’d rather a team mate who plugged a gap that made my working life easier, than a team mate who shared the same interests, was a good beer buddy, but ultimately was trying to plug the gaps I enjoyed plugging!

A beer buddy may work in a sales driven environment where the skills required might be the same across each team. But in a HR team where there are a wide variety of tasks and responsibilities, I want the best mix of skills to achieve success.

What support is there

Well I’m in recruitment, HR, TA or whatever you want to call what I do. So clearly I’m going to answer from that perspective.

The conversation is ongoing and we can see leading influencers in business, in politics and across the media landscape are starting to pick up on this.

If you are looking for educational support:

Ed at Uptimize is doing some great work to show the benefits and opportunities that exist by better understanding neurodiversity. There are some tools and support offered both to organisations and individuals.

I suggest you go check it out!

And if it is assessment support you need:

pymetrics uses neuroscience + AI to predict the right person for the job, while removing bias from the process.

If you want to simplify and gamify your assessment process then look no further. Here is a clear opportunity to eliminate the need for a CV and start to extract bias out of the assessment process, whilst increasing the diversity of applicants.

Clearly there are other players in the market, but this at least gives you a head start.

This shouldn’t be another distraction, another fad or buzzword.

This is a competitive advantage. Many people, managers and organisations will not get it, want to get it, or invest in what it means to assess it.

But those that do, could fill the right roles with the right people and possibly, just maybe, play their part in changing the world for a better place.

Share This
We use cookies to ensure that we give you the best experience on our website. If you continue to use this site we will assume that you are happy with it.Ok - let's do thisPrivacy policy